Where Addiction Recovery and Athleticism Build Strength Together

Addiction has played a significant role in John Breen’s life. As a child, he watched his father struggle and eventually lose his battle to alcoholism. Then, as a young adult, Breen lost his younger sister to medical complications related to addiction. Most recently, in June 2018, his nephew was one of the 4,491 drug-related overdose deaths in Pennsylvania. Today, Breen attends four to five 12-step meetings per week to protect his own sobriety while balancing his professional life as an elite coach of the University of Pennsylvania sailing team and world class master’s athlete. These two poles of Breen’s existence, addiction and athleticism, served as the impetus for the launch of Fitness in Recovery, Breen’s non-profit organization that allows him to help others in the recovery community find relief through fitness and exercise.

“I am very grateful for each of these truths; without them I would be in a very different place today,” Breen said.

Since its launch in 2015, Fitness in Recovery has helped hundreds of people with substance use disorder achieve physical fitness and maintain sobriety by participating in group workouts with a growing, supportive community of their peers. 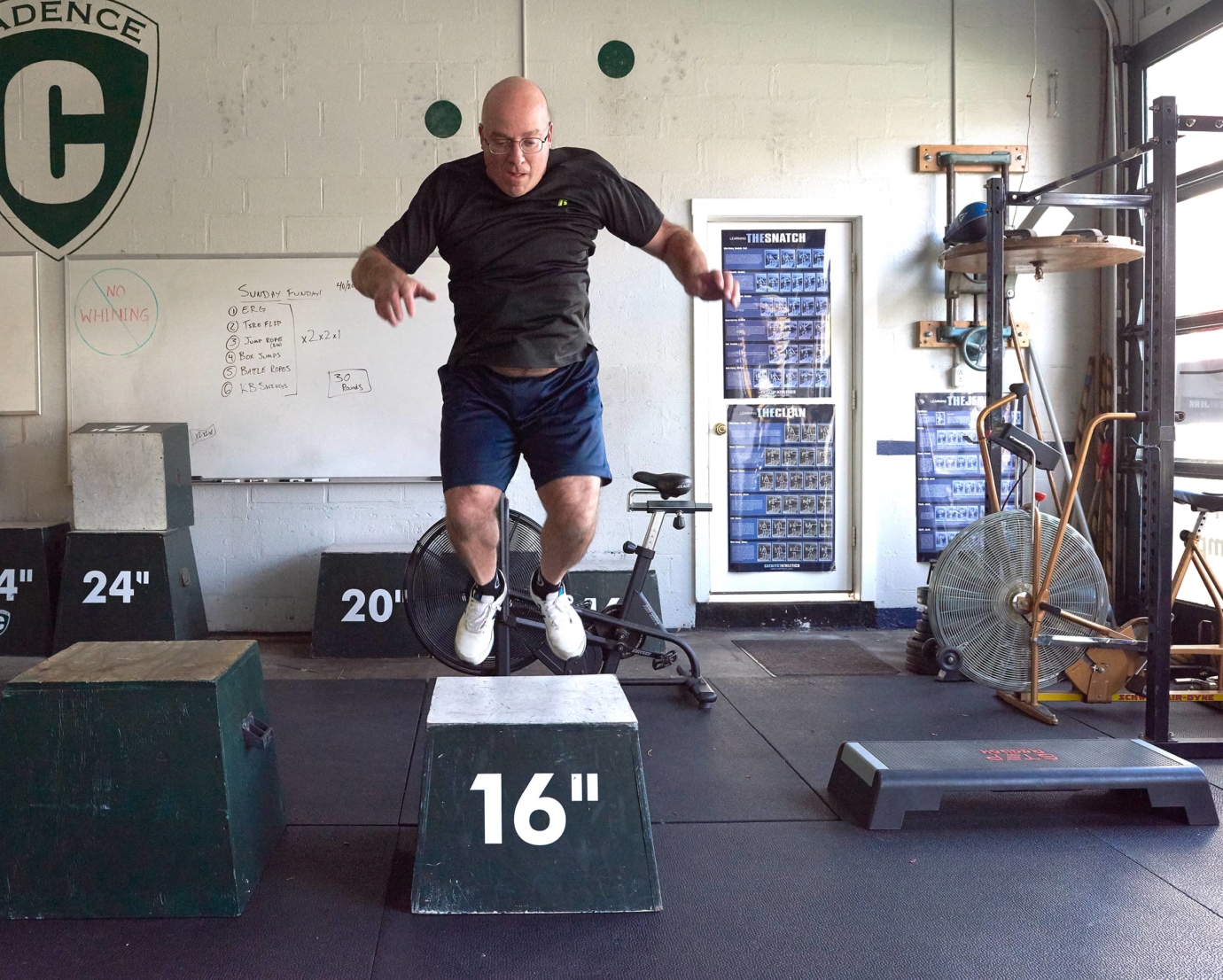 A FIR community member performs a box jump, an exercise known to strengthen the core, glutes, calves, thighs and hamstrings.

Participants in FIR come from all walks of life. According to FIR’s president and co-founder, Sidra Ghafoor, MD, who is also a fellow in Addiction Psychiatry at Penn, the program was initially designed to help individuals in recovery from substance abuse. But once the program got underway, the founders quickly realized that most of the early participants were in recovery from many types of addiction and mental health conditions like eating disorders, depression, or anxiety.

Regardless of the type of addiction they self-identify with, all FIR participants are invited to engage in specialized workouts that have been developed specifically for people in recovery from substance abuse and are led by trained instructors, who like Breen, are connected to the recovery community by their own personal experiences. FIR is also open to those who are supporting people in recovery, as well as college students and other participants who are all united by the program’s goal of helping people overcome life challenges. 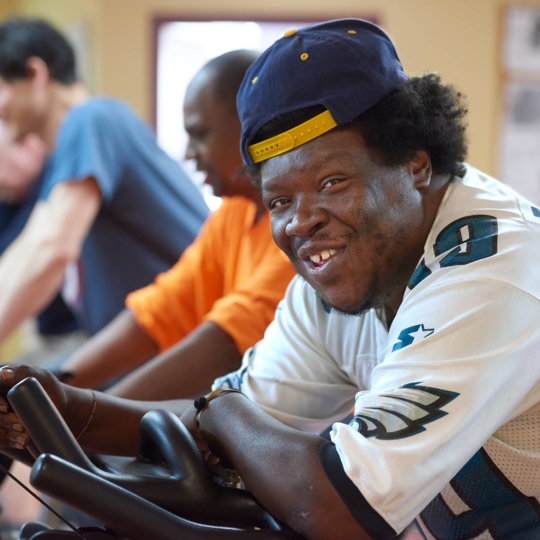 The Medical Division of FIR serves the underserved population in South Philadelphia through its work at The Wedge Recovery Centers.

For FIR participant Jillian M., having a community of people at FIR who understand her long-term recovery struggle has made all the difference in her journey toward continued sobriety.

“Fitness in Recovery has had a profound effect on me spiritually, physically and emotionally. Something pivoted when I got involved in something that was organized and that was led by someone who really understood alcoholics and addicts,” she said. “It was also great having the community. Some days I’d be working out with my peers who I went to meetings with; other days I’d be working out with a 20-year-old or others from different backgrounds and ages, but we’re all in it together.” 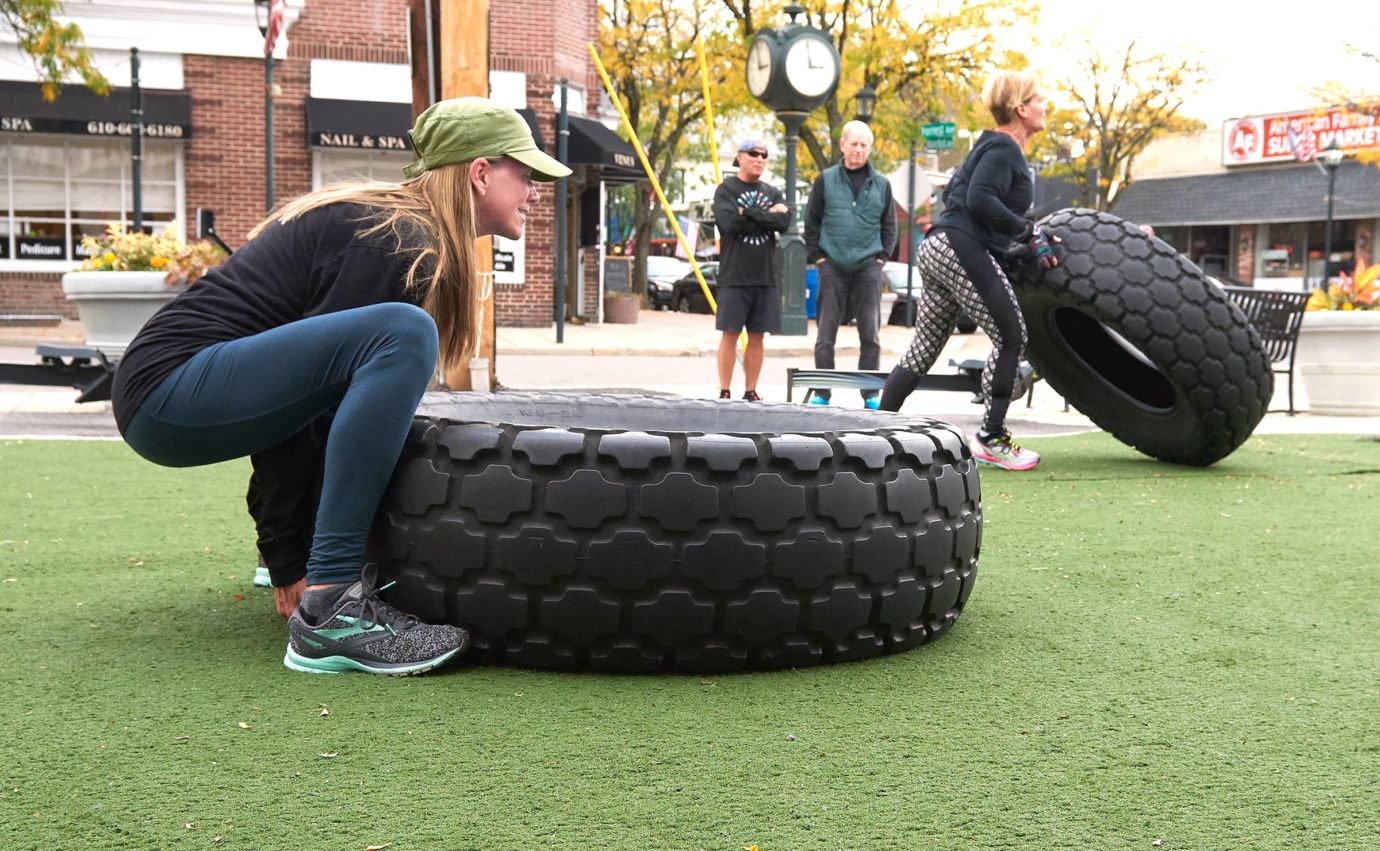 FIR participants engage in rigorous workouts that include activities that build strength, like moving heavy rope and flipping tires.

FIR began by hosting one class per week with only one participant, but word of mouth quickly led to tremendous growth in the program’s structure and participation. In the years that followed, FIR began offering multiple classes per week and participants who were in recovery grew from being part of workout classes to serving as the instructors who lead them.

Ghafoor says the growth has been encouraging, but it’s the community forged by FIR participants that truly inspires.

“A lot of the people that come into the program haven’t worked out for years or they’re isolated from their family and friends because of addiction and they have low self-esteem,” Ghafoor explained.

“Over the course of a few months of consistently participating in the workouts, group members discover a sense of community, connection, and belonging. They become accountable, show up, and expect other people to show up and help one another; they know people are counting on them. The process is transformative.” 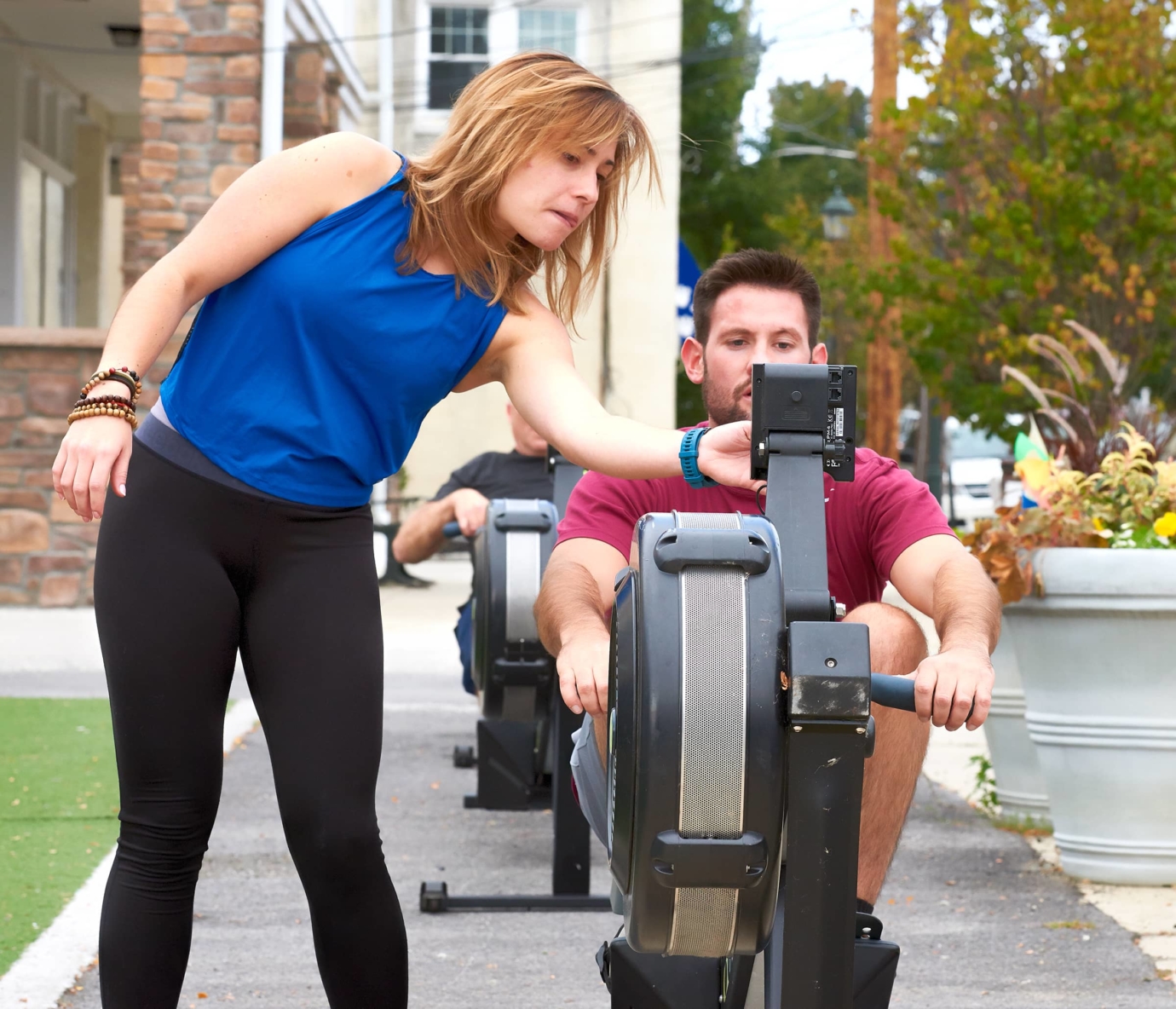 Building connections is key. People in recovery from substance abuse often express that they feel like outsiders in a larger world that doesn’t understand them. Many of them seek relief from this feeling by using their drug or drink of choice. Breen escaped his feelings of disconnectedness by participating in athletics. Now, through FIR, he’s helping others do the same.

“These activities are typically fun, exciting, and ultimately celebratory experiences where I feel I am in my environment; one in which I am at my best, with my people, doing my thing,” Breen said. “If ever there was a place where you can fit in, belong, and feel like you’re on the inside, this is it.”

The sentiment rings true for many FIR participants, including Jean S. who started attending FIR workouts in 2017, during her fifth year of sobriety. For Jean, the people she met in FIR classes and the workouts themselves gave her, “something to hold on to.”

“I knew that when I went to classes I would see other people in recovery there, and I formed bonds with them,” she said. “We’re all very supportive of each other. I knew that if I wasn’t in the best state of mind that day, after the workout, I would always feel better.” Today, Jean leads the FIR program at the Wedge Recovery Centers in Philadelphia as part of FIR’s Medical Division. 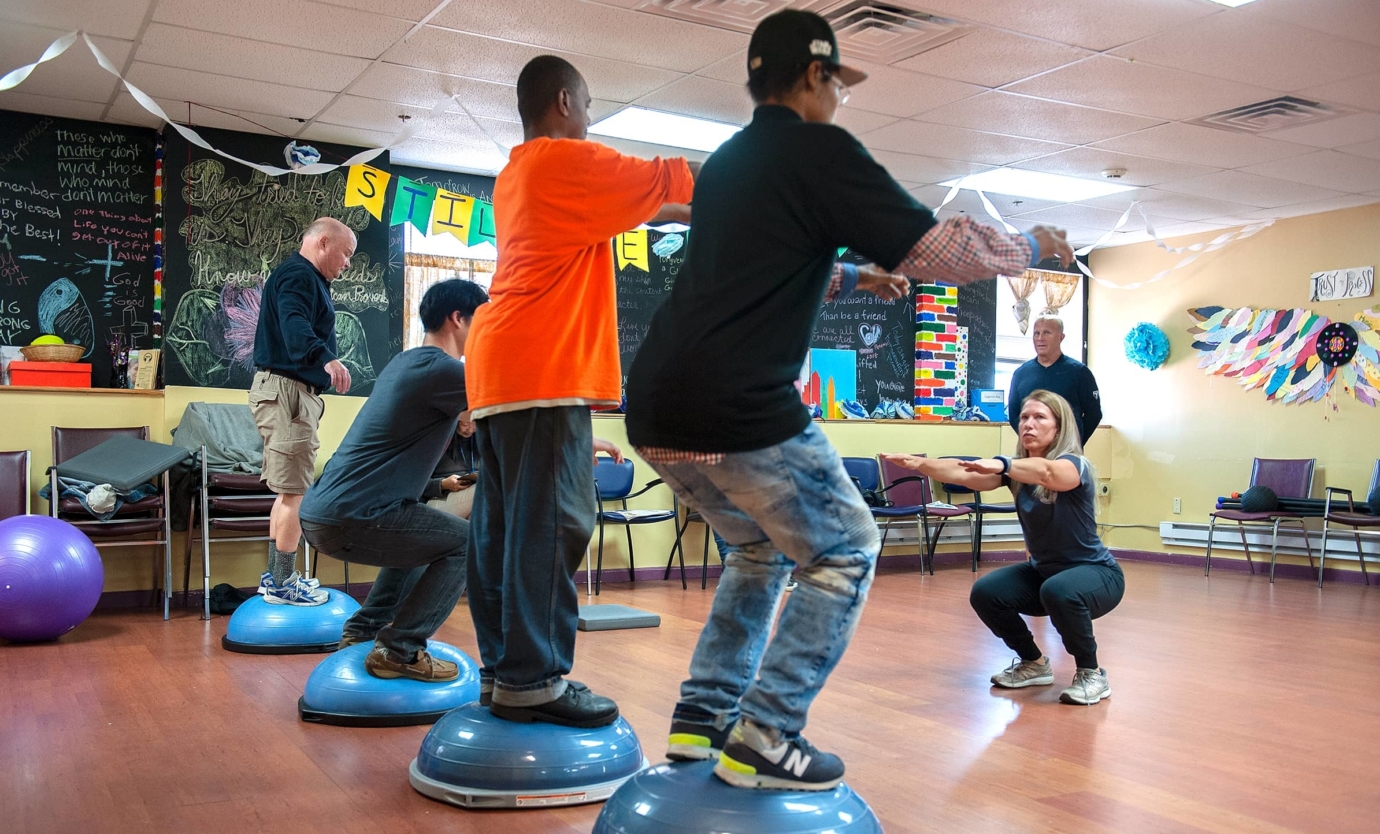 Beyond fostering connections, Breen and Ghafoor are also conducting research that looks at the effects of exercise on brain chemistry and collecting scientific data to demonstrate how FIR programming impacts participants’ depression and anxiety coping skills. FIR participants who took part in a three-month pilot study at the Wedge Recovery Centers in Philadelphia, saw a 52 percent reduction in their PHQ-9 scores (measuring depression severity) and a 13 percent reduction in their GAD-7 scores (measuring anxiety severity).

According to Breen, it’s the physiology of certain movement combinations like following high intensity intervals with a counterpose yoga sequence that has a unique and positive effect on FIR participants’ ability to achieve balance in their overall mental health.

“It’s much like 12-step meetings, but it’s another step beyond in terms of the physical rehabilitation of the brain and that’s because of the way that we’ve designed the workouts,” Breen said. “We don’t just come together and do what’s popular; there’s a lot of thought that goes into developing this instruction specifically for this population.” 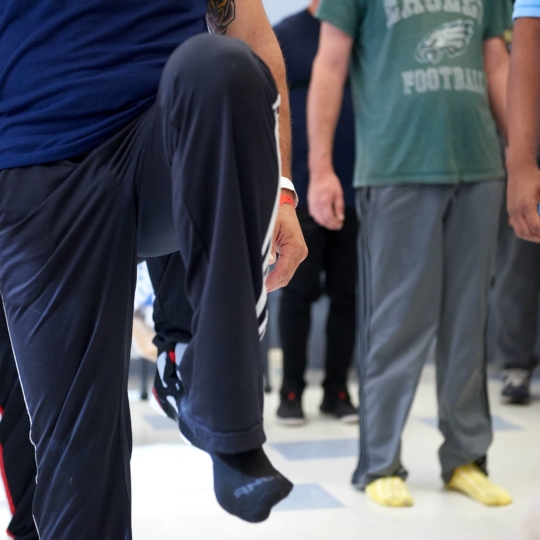 At Penn Presbyterian Medical Center’s Detox Unit, participants in FIR workouts are new to recovery and the program; most opt to stay anonymous during these early steps into sobriety.

As with any recovery program, the founders of FIR know it can be difficult for people to get past feelings of intimidation or inadequacy and find the confidence to participate on a regular basis. Breen says his team works to reassure new FIR participants by showing them that they’ll be joining people from a wide range of ages, shapes, sizes, and abilities.

“All you need to do to get involved is take the first step and show up for a workout,” Breen said. “Once you’re involved, you’ll see, there’s a lot of love and support in this community.”

Where Addiction Recovery and Athleticism Build Strength Together 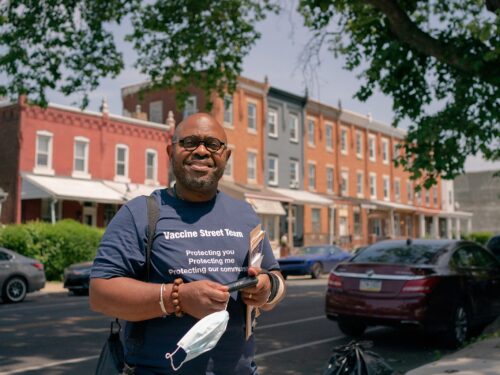